Thank you to all our travellers, who came in great numbers to the Novotel on Friday, November 23, 2018, which marked an important moment in the history of CAH. It was indeed our 40th anniversary! About a hundred friends of CAH: partners, customers, residents, journalists, CAH members, employees and management gathered for this chic and festive cocktail dinner on the theme: Quel beau voyage!

During a special trip on board AIR CAH, passengers received a 1st class boarding pass for Flight CAH40. The charming flight attendant Nathalie Nadon welcomed everyone and humorously divulged the flight instructions. Each traveller was entitled to one drink in the VIP Lounge, including CAH’s blue signature cocktail. CLICK here to see the November 23 Cocktail PHOTO-ALBUM. We also did a special cocktail for the residents of Place Saint-Laurent on March 28, 2019. See for yourself. 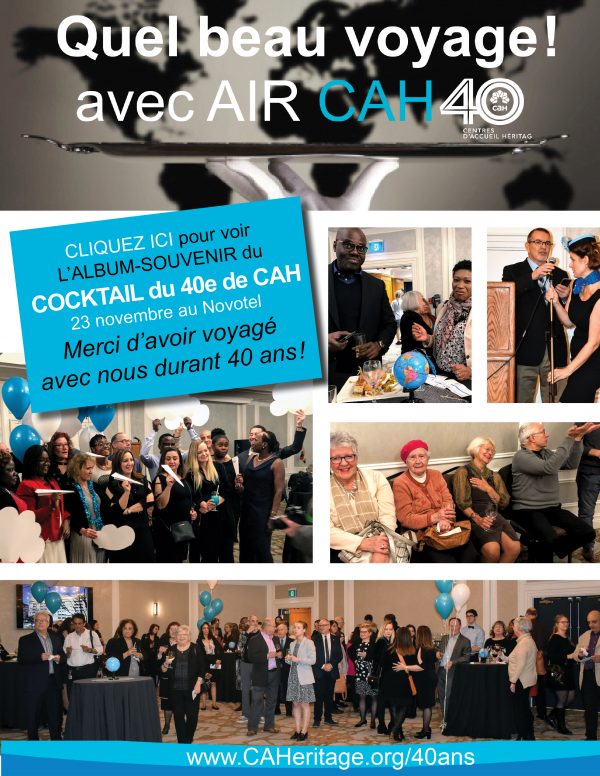 The co-pilots, Maryse Francella (CAH Board Chair) and Barbara Ceccarelli (CAH Executive Director), as well as retired pilots Isabelle Girard (Executive Director from 2012 to 2018) and Gérard Parent (Executive Director from 2003 to 2012) spoke a little bit about CAH’s past… and futur. The conversations were going strong over a background of jazzy music while the waiters were circulating with tasty appetizers among the travellers. We were even entitled to a very skillful young French-speaking magician, Olivier Castel (who’s for hire!).